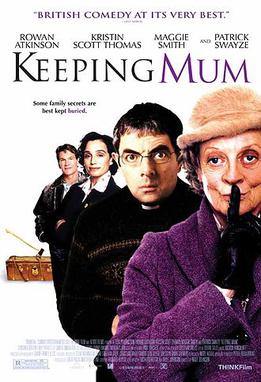 Isn’t it always the way that the films which are the least heralded are so often the best? Think Dame Maggie Smith and Ronnie Barker in My House In Umbria and you’ll understand why this is the case. And it is another DMS vehicle, Keeping Mum, which falls squarely into this same category.

Keeping Mum starts with a short prologue that tells the story of a young woman (Emilia Fox) who murders her husband and his mistress and packs their bodies into trunks. Flash forward forty years, and we’re in a rustic country village. The local vicar (played – as only he can – with comedic aplomb by Rowan Atkinson) has been asked to deliver the key-note address at an important Church conference, and spends the film obsessed with delivering the perfect speech. So involved is he in his own dilemma that he fails to notice his family is in trouble: his wife (Kristin Scott Thomas) is falling under the spell of a sleazy American golf professional (an hilarious performance by the late Patrick Swayze), while his son (Toby Parkes) is being bullied at school and his daughter (Tamsin Olivia Egerton) is generally running wild.

The tension builds nicely through a series of revelations. The housekeeper is none other than the young woman from the prologue. Moreover, she’s also vicar’s wife’s mother, having been forced to give her daughter up for adoption when jailed for her crimes all those years ago. And to top it all off, she’s still killing: first an annoying neighbourhood dog, then the owner of said dog, and eventually – well, let’s just say the body count continues to rise.

The highlight is Atkinson’s performance at the conference. He begins with the bumbling, comedic vicar we’ve come to know from films like Four Weddings and a Funeral. But he then moves into a powerful and moving speech on the mystery of God as expounded in the Book of Isaiah. My ways are not your ways. “In other words,” Atkinson tells us, “God is saying: I’m mysterious, folks – live with it.”

The final twist at the end may disturb some, but this is nonetheless the kind of wonderful character-driven comedy-drama the English make so well. And forget the poor status which Keeping Mum has on Rotten Tomatoes; this film is a little gem!