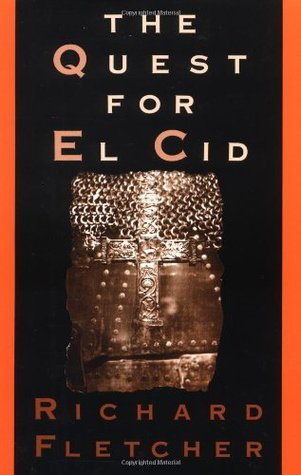 Rodrigo Diaz de Vivar is something of a cultural and nationalistic hero in Spain, portrayed as a noble, principled, and loyal Christian warrior who, despite the intrigues of his fellow nobles and the perfidy of an unworthy king, remained true to both his monarch and his faith, re-conquering large tracts of Spain during the 11th century that had previously been occupied by Muslim invaders from North Africa. This representation of “El Cid” – as Diaz became known, possibly during his lifetime but almost immediately after his death – was memorially depicted by Charlton Heston in the epic movie of the same name.

However, in his engaging and accessible study of Diaz and his historical and social context, Richard Fletcher demonstrates that the Diaz of history and the “El Cid” of folklore are sharply divergent. Indeed, Fletcher shows Diaz for what he was: a Castilian aristocrat, formed in the martial and honorific culture of his caste and society, who was proud, quarrelsome, often at odds with his king Alfonso VI (who was, in fact, an extremely energetic and capable ruler), and who, upon being exiled from Castile, happily sold his skills as a mercenary general to the Muslim rulers of Al-Andalus (the Arabic name for Muslim Spain).

In other words, Diaz was not a self-sacrificing, noble “Christian soldier”, but a condottiere: a political and military animal of unusual skill and agility, whose ultimate conquest of Valencia and its surrounding lands was done, not for King, country, or God, but for his own gain and self-aggrandisement. In the process, Fletcher reveals the darker side of Diaz’ nature, conveniently ignored by the panegyrists and epic-makers (ancient and modern).

Moreover, Fletcher skilfully reveals how this transformation from freebooter to quasi-saint took place. How the medieval masterpiece “The Poem of the Cid” was a response to the political crises of the 12th and 13th centuries, when first the Almoravids and then the Almohads pressed Muslim territorial claims in Spain while Christian rulers and nobles squabbled among themselves; the Cid was depicted as an archetype of loyalty and moral purity the aristocrats were urged to follow. How the cult of the Cid was the practical invention of the monks of the monastery of Cardena, where Diaz was buried, who turned his memory and popular appeal into a tourist attraction and pilgrimage must-see as a solution to the near bankruptcy of their house in the late 13th century. Finally, how the Cid was converted by the modern Spanish historian Menendez Pidal into the embodiment of Spain’s self-conception as the upholder of Catholic orthodoxy and national solidarity in the face of the scepticism and claims of post-Enlightenment rationalism.

Fletcher’s study of Diaz is an accessible, informative guide to the complexities and pitfalls of untangling the threads of history and popular culture; it sheds an illuminating glow on a dark and poorly-documented moment in European history; and it conveys the author’s passion for the subject through a dry, observational humour that carries the reader from start to finish. Popular historical writing at its very best.