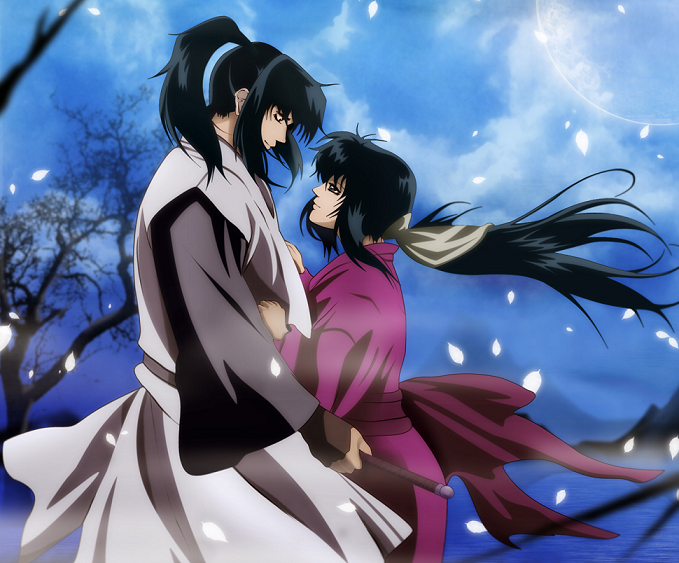 In 1614, retired Shogun Tokugawa Ieyasu organises a duel between representatives from the Iga and Kouga clans. The Iga and Kouga have been at war for four hundred years; but like the other noble families of Japan, they have been forced to abide by the non-hostilities mandate imposed by the Tokugawa shogunate. This fragile peace is embodied in the betrothal of Kouga Gennosuke and Iga Oboro; however, unbeknown to the young lovers, a rift is forming within the Tokugawa, as rival factions line up behind Ieyasu’s grandsons to see which one will inherit the title of Shogun. However, Ieyasu has decided to use the Kouga and Iga as proxies to settle the succession dispute – and as a result of the duel, Ieyasu decides to issue the clans a limited exemption from the non-hostilities mandate. Under its terms, the ten best ninja from each clan will engage in a to-the-death battle, the victor determining which of Ieyasu’s grandsons will become the next Shogun. As a consequence of the brutal and tragic repercussions of this act of cynical statecraft, Gennosuke and Oboro are confronted by a stark choice: loyalty to the shogunate – or loyalty to their love for one another.

Based on the manga by Masaki Segawa (which was in turn based on a 1958 novel by Futaro Yamada), “Basilisk” was produced by storied anime studio Gonzo and originally aired in Japan in 2008. Rendered in a lush visual style typical of Gonzo’s approach to animation, “Basilisk” proceeds at a headlong pace, savage battles punctuated by moments of philosophic reflection. The supernatural talents possessed by the respective ninja are in keeping with east Asian folklore about the abilities of great warriors; but this is never allowed to overwhelm the central pathos of the story, focused as it is on the love shared by Gennosuke and Oboro, and the manipulation of the clans’ history of animosity for cynical political purposes. A tragedy on a grand, Shakespearian scale, “Basilisk” is a violent but compelling exploration of the helplessness of individuals in the face of abusive power, and the capacity of the powerless to nonetheless retain agency even when overwhelmed by their circumstances. A second series, set ten years after the original, aired in Japan in 2018.