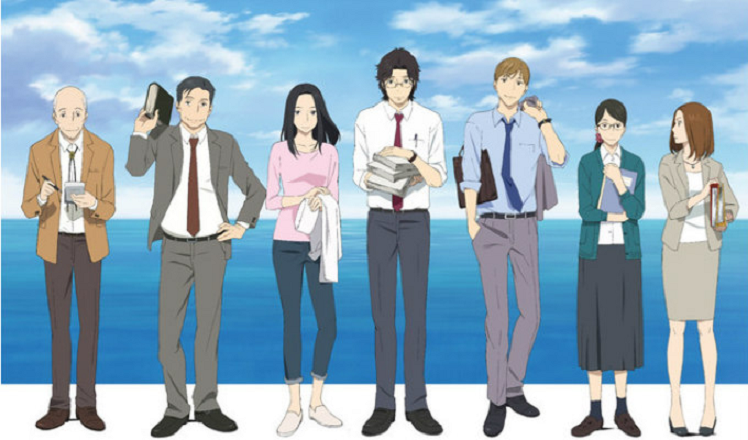 Mitsuya Majime is a deeply introverted man who struggles to articulate his feelings – and at night, his sleep is disturbed by a recurring nightmare in which he drowns in the sea of words that are emblematic of his inability to say precisely what he means. He tries hard at his job as a salesman for a publisher, but his personal awkwardness and inability to read social cues gets in the way of his effectiveness. One day, a chance encounter leads to an interview with Kohei Araki, the retiring chief editor of the publisher’s dictionary division; Araki dreams of creating a dictionary that will help people navigate the “sea of words”, and Mitsuya’s obvious love for language convinces Araki that he is the man to take over and see the task through to completion. But the dictionary department is despised by other departments within the publishing company as a money-trap, and the lack of resources means the development process is painfully slow. Eventually, it becomes a race against time as Araki’s health begins to fail; and along the way, Mitsuya must learn to deal with the complications of falling in love, finding friendship in unexpected places, and, ultimately, the question of how to communicate with others.

Based on an acclaimed novel by Shion Miura and produced by Tokyo-based animation studio Zexcs, “The Great Passage” first aired on Japanese television in 2016. Animated in a naturalistic style that emphasises facial expression and realistic environmental settings, “The Great Passage” is a gentle, warm-hearted slice-of-life comedy that is both satisfying as a story and gratifyingly pitched at an adult audience. The word-nerds who (mostly) make up the character list in this story are depicted as flesh-and-blood human beings, while the non-nerd characters are likewise depicted in sympathetic terms that defy simplistic stereotyping. Western audiences are also given a glimpse into the culture of the Japanese workplace, and the pressures to work late and attend work-related functions that are the lot of the average salaryman. A nuanced and layered story about a socially awkward man who longs to find a meaningful place in life, “The Great Passage” is understated but affecting viewing that, thankfully, also respects the intelligence of its audience even as it touches their heart-strings.