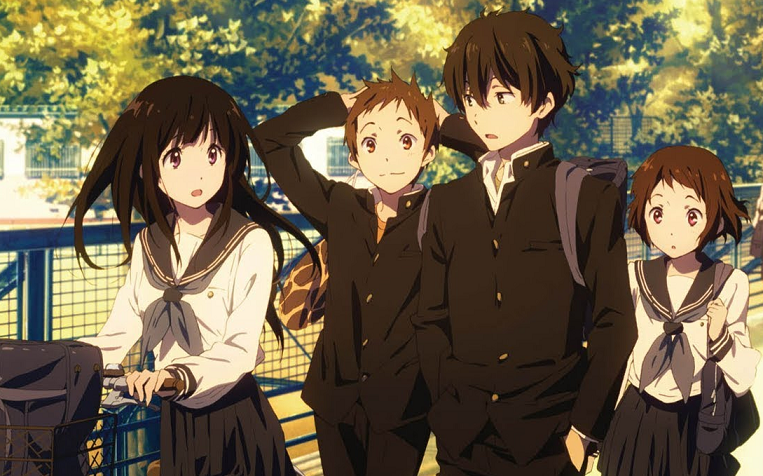 Cynical and disillusioned as only teenagers can be, Hotaro Oreki is determined to get through his time at Kamiyama Senior High School by expending as little energy as possible – which includes avoiding the school’s many student clubs and extracurricular activities. But when Hotaro’s older, globe-trotting sister Tomoe – a Kamiyama alumnus – asks him to join her old school club because it faces closure due to a lack of members, Hotaro thinks he has stumbled on the perfect solution: as the club’s only member, he’ll be able to goof off under the guise of participating in school life. However, it is only after Hotaro has filled in the official paperwork to join the club that he discovers someone else has joined ahead of him: Eru Chitanda, ace student and member of one of the Kamiyama district’s four elite families. Joined by Hotaro’s childhood friends – the carefree Satoshi and the rather more intense Mayaka – the four re-form the Kamiyama Senior High School Classic Literature Club – and, before Hotaro knows it (and much to his dismay), his knack for problem solving combined with Eru’s intense curiosity drives the four friends into a series of mystery-oriented adventures.

Based on the hugely successful novel by Honobu Yonezawa (itself part of a series of popular YA novels collectively known as the “Classic Literature Club mysteries”), “Hyouka” was produced by much-loved anime studio Kyoto Animation and aired on Japanese television in 2012. Set in Gifu Prefecture, a mountainous region in the centre of the main Japanese island of Honshu, and featuring the landscape and seasonal changes of Yonezawa’s hometown of Takayama, “Hyouka” combines a vibrant visual aesthetic with a wistful, droll sense of humour rarely found in anime. The process through which the cynical and self-effacing Hotaro is unable to resist the clever-but-naive Eru’s curiosity is observed with a wry, understated humour; while the initially prickly relationship between Satoshi and Mayaka that points to deeper mutual feelings is articulated without melodramatics. The mysteries at the core of each episode – some of which point to the darker motivations of the human heart – ultimately become the backdrop to the unfolding relationships and connections between the four main protagonists, making “Hyouka” less of a “whodunnit” than a superior high-school/slice-of-life drama absent the mawkish histrionics so often found in this genre. “Hyouka” spawned an OVA feature, a live-action film, and a manga adaption.