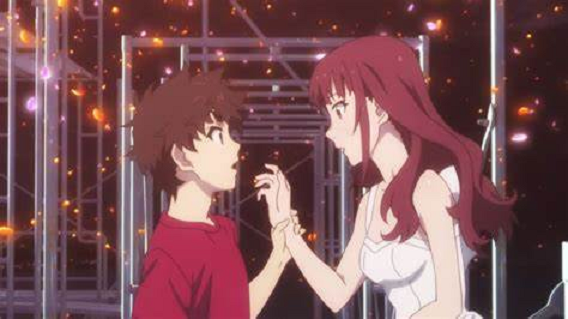 Nazuna Oikawa, an attractive but aloof teenager living in a sleepy seaside town in Japan, is dreading the prospect of having to move when her mother remarries in the summer. One day, while on her way to school, she spots a strange bauble on the beach and, on a whim, decides to keep it. Norimichi Shimada attends the same school as Nazuna, and although they hardly know one another, he harbours a secret attraction for Nazuna. One day, while Norimichi and his friend Yusuke are on pool cleaning duty for their school swim club, Nazuna challenges them to a race in the pool, saying that if she beats them, she will go to the fireworks display scheduled for that evening with whichever of the two boys comes second. Nazuna ends up asking Yusuke out on the date; but when he stands her up, Norimichi and Nazuna find themselves together instead. At the moment when Norimichi realises Nazuna plans on running away, her mother appears and forcibly drags her back home. Noticing the bauble which Nazuna has dropped, Norimichi picks it up; and when he shortly afterwards gets into a violent argument with Yusuke, Norimichi’s wish that he had been asked out on the date activates the bauble and triggers a time slip. What follow are a series of scenarios in which Norimichi explores the consequences of what might have happened if his wish had come true. Ultimately, however, he is confronted by the truth that the alternate realities created by his wishful thinking are not the timeline in which he and Nazuna properly belong. His choice: to continue running away, or face up to the realities implicit in returning to his own timeline.

Based on a 1993 live action television movie by Japanese filmmaker Shunji Iwai, “Fireworks” was produced by anime studio Shaft and released in Japanese cinemas in 2017. Receiving mixed reviews from critics, it was nonetheless a box office success, ultimately becoming the seventh-highest grossing anime film for that year (which, given Japan’s crowded anime scene, takes some doing). Beautifully animated with all the modern visual techniques filmmakers now have at their disposal, the narrative arc for “Fireworks” is nonetheless a little shaky at times, as the threads created by the time slips are not entirely satisfactorily brought together again. Likewise, the characterisations seem at times a little hollow; and while Nazuna’s desire to run away is clear, her reasons for wanting Norimichi to go with her are not. Nonetheless, the film explores with a light touch the issue of “What if?” and the important – if sometimes painful – realisations that come with personal maturity. It is also graced by a gentle humour that non-judgmentally depicts human imperfection: Norimichi and his friends are gauche and crude as only teenage boys can be; while Nazuna, though more mature, is insecure and inclined toward a selfish impulsivity. Although not in the same league as “A Silent Voice” or “After The Rain”, “Fireworks” is nonetheless a thoughtful and emotionally affecting coming-of-age tale which, if for nothing else, is worth watching for its stunning visuals.