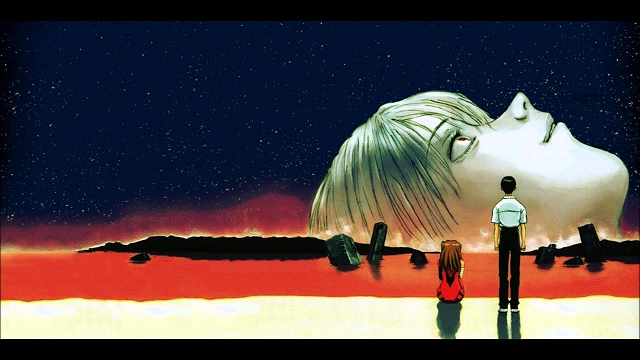 In Part I of this series, we explored the escoteric and narrative backgrounds, as well as the core story of the original Neon Genesis Evangelion television series. In Part II, we examine the conclusion to NGE, and the subsequent follow-up feature films, Neon Genesis Evangelion: Death and Rebirth and The End of Evangelion, which were produced in response to the controversial conclusion to NGE. CAUTION: CONTAINS SPOILERS

When the Final Angel is destroyed, and SEELE’s leadership realises that the EVA piloted by Shinji was created from organic material taken from Lilith, they demand that Ikari hand it over to them so that it can be used to initiate a Third Impact. When Ikari refuses to do so, they realise that he has betrayed them. Consequently, SEELE hacks NERV’s computer system and falsely informs the Japanese Government that it has discovered that NERV is planning to destroy the world. This prompts the Japanese Self-Defence Forces to launch an all-out attack on NERV headquarters. As the battle rages (with the resulting deaths of most of the NERV personnel, including Misato and Ritsuko), Ikari and Rei trigger Ikari’s version of the Human Instrumentality Project. The consequences of this are depicted in the final two episodes of Neon Genesis Evangelion, which consist of a sequence of flashbacks, montages of both animated and photographed images overwritten with flashing text, and an interlude depicting an “alternate” Evangelion universe. In this sequence, Shinji (and others) are forced to confront their fears and questions of their own self-worth. Ultimately, Shinji has an epiphany in which he realises he needs other people in order to flourish as a human being, that life is worth living, and that he does not need to pilot an EVA to justify himself to his father – thus he is able to overcome the barrier of negativity that has alienated him from others. The series concludes with Shinji surrounded by the other main characters, who applaud his realisation. Whether this means that Instrumentality has been avoided, reversed, or has progressed to its final end is left unclear.

Neon Genesis Evangelion was both critically acclaimed and hugely successful. However, it was also wildly controversial, to the point where the series’ creator and director, Hideki Anno, and the production studio Gainax, were the subject of death threats for what some regarded as the series’ “betrayal” of its audience: the fact that much of the audience found the conclusion too abstract and therefore incomprehensible, and that it wasn’t the more conventional action-oriented conclusion they were expecting.

As the title implies, Neon Genesis Evangelion: Death and Rebirth consists of two parts. The first part, Death, is essentially a recapitulation of the original 24 episodes of NGE via a combination of still clips and new animation created for the purpose. Some scenes from the original series were re-drawn, while others were augmented and extended. The whole sequence was constructed as a scenario in which four of the main characters (Shinji, Rei, Asuka, and Kaworu) play Pachelbel’s “Canon” as a string quartet, with separate segments focusing on each “player”.

The second part, Rebirth, consists of material that was supposedly intended as a 25th episode of the original television series, and which would go on to form the bulk of the first part of The End of Evangelion. In Rebirth, the preparations for the initiation of Instrumentality are begun, the military assault on NERV headquarters takes place, and SEELE sends in a squad of new-type EVAs, the so-called “Mass Produced Evangelions” after the assault is beaten back. At this inconclusive point, Death and Rebirth comes to an end.

In keeping with the confusing and convoluted history of the franchise, the Death segment was later re-edited and retitled Death(true). A subsequent “final” version was released as Death(true)2.

Like its “placeholder” predecessor, The End of Evangelion consists of two parts, each of which were supposedly the episodes 25 and 26 which Hideki Anno had planned for the original series. In the feature film, they are given the titles “Air” and “Sincerely Yours” respectively.

“Air” begins with the falling out of Dr Gendo Ikari and his erstwhile superiors at SEELE. When the latter realise that Ikari intends to initiate the Third Impact on his own terms, they attempt to hack into NERV’s Magi computer system, but are thwarted by Ritsuko. SEELE then provoke the Japanese armed forces into attacking NERV headquarters, but this assault is destroyed by Asuka; having been removed from her hospital bed and placed inside her EVA by Misato while still unconscious, she is reanimated by the voice of her long-dead mother and, thus rejuvenated, springs to NERV’s defence. Meanwhile, Misato manages to rescue Shinji from attacking Japanese soldiers at the cost of her own life; Ritsuko attempts to activate Magi’s self-destruct system to avenge herself on the callous Ikari (who had an affair with and then discarded her mother), but the system refuses to obey her commands, which gives Ikari time to kill her. Asuka manages to defeat nine automated “Mass Produced Evangelions” which SEELE sends against her; but when she lets her guard down, the MPEs revive and eviscerate both Asuka and her EVA. Having managed to make it to his EVA thanks to Misato’s sacrifice, Shinji sees what has happened to Asuka as he flies over NERV headquarters, and screams in horror at the sight.

In “Yours Sincerely”, Ikari attempts to absorb Rei, who carries Yui’s genetic identity, by plunging the hand in which Adam’s “seed” soul is implanted into her body. Rei, however, rejects Ikari, breaking off the arm and absorbing it into herself. She then initiates her own Third Impact by merging with Lilith. The merged Lilith/Rei being grants to a now unhinged Shinji the choice of whether or not to allow Instrumentality to proceed to its final conclusion. Deciding that humanity doesn’t deserve to survive, Shinji elects to allow Instrumentality to proceed. As the Lilith/Rei being begins the process of merging all human life into a single, transcendental soul, Shinji experiences episodes in which he is engaged in conversation with Rei and Kaworu about the meaning of life; as a result, he decides that the joy of connection and relationship overcomes the risk of loneliness and alienation. Shinji reverses his earlier decision and rejects Instrumentality: the Lilith/Rei being begins to disintegrate, releasing back to life all the human souls it has captured. Shinji is returned to earth and finds himself on a beach next to Asuka; traumatised by his experiences, he unknowingly begins to strangle her, but stops when she gently strokes his face. Returned to self-awareness, Shinji breaks down, sobbing; Asuka looks at the sky and then at Shinji and makes an ambiguous remark which could be interpreted either as “How disgusting” or “I feel sick”.

The End of Evangelion was both commercially and critically successful, and audiences appeared to appreciate the much more straight-forward ending. Interestingly, the ambiguity of Asuka’s closing line lead to the wide-spread (and erroneous) belief that The End of Evangelion was Hideki Anno’s “revenge” on the public who had reacted so negatively to his original. The remark “How disgusting/I feel sick” was allegedly Anno’s comment on the new, “improved” version.  Unsurprisingly, given the history of the franchise, a “new” edition was subsequently released under the title End of Evangelion: Rebirth, which consisted of the Death(true)2 version of Death and Rebirth being attached to End of Evangelion.