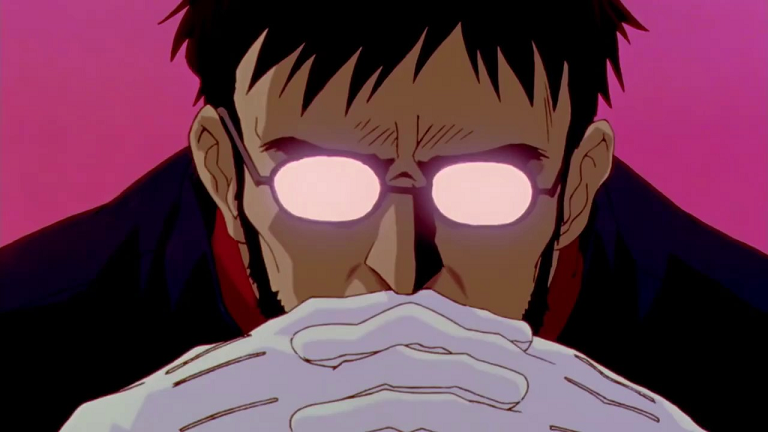 It is clear from the convoluted history of the Evangelion franchise that the story as it was originally conceived and as it eventually wound up becoming are two wildly divergent tales. Not only are the events themselves different, the thematic underpinnings to those events alter remarkably. The original Evangelion series was a distinctly interior monologue in which the focus was on Shinji Ikari’s existential angst about his own identity, his relationship with his father, and his conflicted feelings for both Rei and Asuka. By the End of Evangelion, the focus shifts to Rei as the decisive agent who, in giving Shinji the opportunity to determine humanity’s fate, enables him to come to terms with not only who he is as a person, but with the whole human condition. The Rebuild of Evengelion sequence offers multiple foci as Kaworu receives an expanded role, the new character Mari signals the shift in the narrative away from its original philosophical/theological/existential musings, Rei becomes less central to Shinji’s self-discovery, Asuka is less Shinji’s tormentor than his what-might-have-been counterpoint, and even Misato becomes a more cynical, hard-bitten character than the up-beat, take-on-the-world dynamo she was portrayed as in the original Evangelion series. Altogether, the ensemble cast relieves the Shinji character of the burden of carrying the entire weight of the narrative’s ending and resolution; each in their own way combine to bring the “Rebuild” sequence to its close.

Throughout all its iterations, Evangelion remains choked with Kabbalistic, Midrashic, Gnostic, and early Christian and Second Temple Jewish apocalyptic references, all reworked and re-interpreted to fit the narrative and thematic ideas Hideki Anno tried to express through the franchise. These often get in the way of the story-telling, especially in the original Evangelion series.  Perhaps that’s what contributed to so much fan fury with the last two episodes of Neon Genesis Evangelion: the simultaneously abstract yet dense symbolism and archaism made making any kind of sense of those episodes nigh-on impossible. With each new iteration, these references begin to thin out; but they remain confusingly ever-present, even in the “Rebuild” sequence as not only the “Spear of Longinus” is mentioned, but also the hitherto unknown “Spears of Cassius and Gaius”. Likewise, it appears that Gendo Ikari’s “gateway” to fusing with his dead wife Yui shifts from the “seed soul” of the Adam being and its incestuous insertion into Rei as the medium for unifying Adam and Lilith, to his only slightly less incestuous fusing with the merged Asuka clone/”final Angel” EVA via the (also) previously unmentioned “Key of Nebuchadnezzar”. Even in the final “re-writing” sequence as Shinji is coming to terms with his (and his father’s) past and kick-starting a whole new world, there are plenty of head-scratching moments of the WTF variety.

Evangelion’s creator, Hideki Anno, has stated that the original Neon Genesis Evangelion did not express the story as he originally conceived it, and that he was prevented from doing so by budgetary, timeframe, and technological limitations. Yet it seems clear that, while the general concept may have been clear in Anno’s mind from the outset, the development of the Evangelion franchise over its many iterations shows he really didn’t have the story details down pat at the time; or, at the least, that these details didn’t come into focus until much later. Anno has also suggested that the original Neon Genesis Evangelion attempted to address some of the emotional and psychological angst he was experiencing at the time; but if so, they clearly obstructed the narrative thrust of the series. They might also help explain why the Shinji character remains so consistently unappealing across the franchise, by turns immature, weak-willed, unreliable, and ultimately without a clear conception of himself.

So what can ultimately be said about the Evangelion franchise? In many respects, it remains a complete mess. The different endings, the different narrative emphases and thematic spotlights, the different characters or their changing roles – all of these point to a concept that was insufficiently thought through and poorly executed to begin with, and which has endured repeated attempts at reconstructive surgery in the years since. But even those attempts were botched and required their own “repackaged” versions. The “Rebuild” sequence acknowledges what a ramshackle mess the whole thing had become, a confusion so complete that it needed to be torn down and reconstructed from the ground up. The “Rebuild” movies are by far the best iteration of the entire Evangelion franchise, and frankly point to what the original series ought to have looked like if more thought, planning, time, and (possibly) money had been available.

Yet, despite the dog’s breakfast the franchise has become, there is no denying that the original NGE series, the End of Evangelion feature, and the Rebuild of Evangelion sequence have earned both critical acclaim and enormous commercial success. Yes, the last two episodes of Neon Genesis Evangelion caused a lot of angst and anger (especially among fans who were expecting a more action-oriented conclusion in keeping with the tropes typical of mecha/post-apocalyptic anime, but that outrage existed alongside the acclaim and the viewing/box office numbers. Sometimes it came from the same sources. Whatever the case, Neon Genesis Evangelion has become one of the touchstones of anime, right alongside Akira, Ghost In The Shell, Ninja Scroll, Perfect Blue and Cowboy Bebop.  There can be no denying its place in the history books.

And, frankly, that’s where it should stay. The “Rebuild” sequence has probably given us the best version of Evangelion that we are likely to get. Anything else beyond this will just add to the confusion. Unfortunately, I have seen media reports in which Hideki Anno is quoted as saying that he doesn’t know if the series is now completed, and that he might have something more to say.

My response is: Anno-san – don’t. Just don’t. For all our sakes.