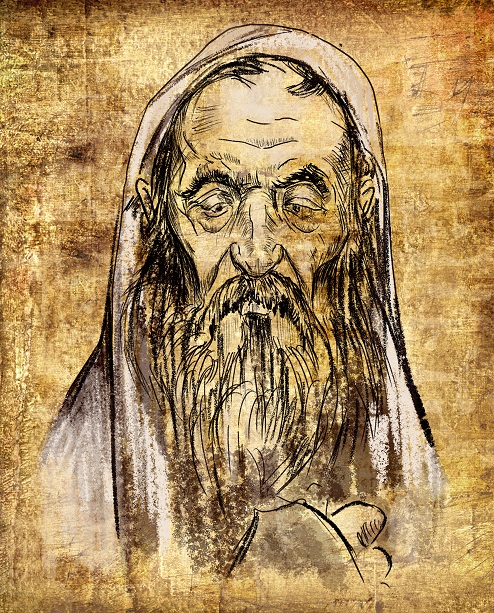 Quite a few years ago now, I saw a television interview in which the Australian media personality Andrew Denton was speaking with the renowned naturalist and documentary maker, Sir David Attenborough.  Denton asked Attenborough whether or not his experiences as a naturalist had caused him to have a sense of “God’s pattern” in the world, to which Attenborough replied, in part:

…think of a parasitic worm that lives only in the eyeballs of human beings, boring its way through them, in West Africa, for example, where it’s common, turning people blind. So if you say, “I believe that God designed and created and brought into existence every single species that exists,” then you’ve also got to say, “Well, he, at some stage, decided to bring into existence a worm that’s going to turn people blind.” Now, I find that very difficult to reconcile with notions about a merciful God. And I certainly find it difficult to believe that a God — superhuman, supreme power — would actually do that.

But does the existence of this logical flaw eliminate the substance of the problem: if, afterall, God exists, is good and loving, and is all-knowing and all-powerful, then why do innocent people suffer? What is more, this conundrum raises another, even more disturbing possibility: that God does indeed exist, but is not good and loving, and inflicts suffering upon humanity simply because it is within God’s power to do so.

What all this amounts to is that pointing out the logical flaw in this common response to the “Problem of Suffering” does not resolve the questions it raises.  The existence of suffering may be insufficient grounds for doubting the existence of a good and loving God, but it still raises deep and uncomfortable questions.  Why, afterall, should suffering exist if, as the Book of Genesis asserts, God looked upon creation and saw that it was good[1]?

Of course, we could conceivably argue that creation, while good, is also imperfect; and that the unfolding of creation over time is a movement toward its perfection in God, toward the fulfilment of the creative purpose for which existence was brought into being.  But that is an argument that is hardly likely to satisfy those who raise the issue of suffering to argue against the existence of a good and loving God; for, if nothing else, it suggests that God is some kind of monstrous experimenter, one who is prepared to use humans (and other life forms) as cosmic lab rats in pursuit of some higher purpose we can never understand.  Surely no such perfect state could be worth any amount of suffering and hardship, especially by a creation that is helpless to do anything about the suffering which it experiences? As Dostoyevsky has one of his characters declare in the novel The Brothers Karamazov: if the suffering of even one child is the cost of admission to heaven, I’d much rather return my entry ticket.

So where does that leave us? How do we respond to the question of suffering, and the relationship between suffering and the notion of a good and loving God? How do we maintain a belief in the loving goodness of God in light, not just of suffering, but of the fact that suffering often afflicts the innocent and the good?

We might be tempted to write it all off as one big imponderable mystery and leave it at that. Why, afterall, should we worry ourselves with such a big question when we have so much on our plates on a day-to-day basis? But my view is that this is very much an issue we need to concern ourselves with, not least because it is an example in which theology, far from being a remote, ivory tower affair, does in fact hold deep implications for our everyday existence.  Because the view we take of the relationship between God and suffering carries the very real potential to dictate our response to human suffering itself.

And because the theological response to the question of suffering is so important, we are going to spend the next four weeks exploring these questions. And we’re going to do it in a staged process, using one of my favourite texts from the Hebrew Scriptures: The Book of Job.

By way of background, Job is an ancient text, at least two and a half thousand years old; and the scholarly consensus is that it derives from an oral folklore tradition that is even older.  The story it tells is, in some respects, deceptively simple: Job, a good and righteous man with a reputation for wisdom, who enjoys good health, has a large family, and who possesses great wealth, suffers a series of disasters.  Firstly, his children are wiped out in what we might today call a “freak accident”.  Secondly, his servants are slaughtered by rapacious barbarian raiders.  Thirdly, all his property and wealth are stolen.  Finally, Job himself is afflicted with a loathsome disease. In short, Job’s situation conforms to that old adage: it never rains, it pours.  Job has been violently wrested from a position of privilege, comfort, and security, into a situation of suffering, loss, and tragedy.

But it’s at this point that things start getting complicated.  For the text makes perfectly clear two things.  The first is that Job has done nothing to deserve or warrant such suffering.  The narrative emphasizes that Job is a good and righteous man – indeed, it declares him to be “blameless”.  So there are no possible grounds for stating that Job has in any way brought this calamity upon himself or contributed to his own suffering.  He is the archetype of the suffering innocent.

But secondly – and much more confronting – is the fact that the text makes perfectly clear who is responsible for Job’s suffering: God.  God, in debating with the Satan about the nature of human righteousness, points to Job and says, in effect: See – there is a good and righteous person! There is someone who is faithful to my covenant with humanity! And the Satan challenges God and says: Do you really think Job is good and righteous because he reverences you? He’s only “righteous” because he knows keeping in your good books is the best way to keep the cushy life you’ve bestowed upon him.

Now, it should be pointed out here that the “Satan” referenced in the text is not the same Satan/devil figure who subsequently appears in the Gospels to tempt Jesus. The name ha-Satan in Hebrew means “the Accuser”; and in the context of Job, the Satan appears as one of the “heavenly beings” – one of the members of God’s court (albeit a somewhat disreputable one!) whose purpose is, as it were, to act as the counsel for the prosecution against humanity. Just as, in the Roman Catholic Church, the “devil’s advocate” is a high church official charged with making the case for why someone should not be beautified or canonized, so the Satan in Job is the one who makes the case for why God should not love humankind. And this judicial setting is important: because it will be mirrored in Job’s later behaviour.

It is in this capacity as prosecutor that the Satan argues that Job’s alleged righteousness is pure selfish self-interest; he’s only in it for what he can get out of it. The minute God turns God’s back on Job, his faith will evaporate like fog on a sunny morning.  And God’s response is to allow the Satan to inflict on Job every suffering imaginable short of actual death.

And that’s horrible. Whichever way you cut it, God has, in effect, condemned Job to the most cataclysmic suffering in order to win an argument with the Satan.  It seems we’re back to God the experimenter, God who might be all-powerful and all-knowing, but who isn’t necessarily good and loving.  What are we to do?

It seems to me that the first thing we need to understand is that Job, like Ecclesiastes, represents a dissenting tradition within the Hebrew Scriptures that reacts against, and critiques, the conventional wisdom of the received tradition – a wisdom represented by texts such as The Book of Proverbs.  In that tradition, the relationship between God and humanity is a kind of contract: if humans obey God’s law, God will bless them with success and happiness; if they disobey, they can expect calamity and strife.  But Job is arguing that this is not at all what the covenant with God is about; and part of its dissenting genius is that it puts the words of conventional wisdom into the mouth of figures like the Satan.  Afterall, the Satan says that Job’s “righteousness” is nothing more than a profit-and-loss calculation: obey the rules and prosper or disobey and suffer.  But God takes the opposing stance: Job’s righteousness is not a matter of mere obedience to rules, but of participation in relationship.

Viewed in this light, we can see, right from the outset, what a subtle and sophisticated text Job is, precisely because it begins with a concise encapsulation of the conventional wisdom from which it dissents.  What is more, by setting up the question of Job’s righteousness, it cuts to the heart of conventional wisdom’s description of “righteousness”, not as an inner quality or way of viewing the world, but as mere compliance with divine edict. Once we understand this, we can see that God’s decision to let the Satan afflict Job is not the callous indifference of a cosmic experimenter but an expression of God’s faith in humanity. In other words, of God’s faith that humanity is not selfish and self-serving, but genuinely desires to make a response in faith to God’s invitation to relationship. And such is God’s faith in humanity that God is prepared to let God’s own faith be put to the test – even at the risk of being proven wrong by the Satan.

That is a colossal recalibration of our understanding of the relationship between God and humankind, illustrated through what I think is the central position taken up by the author of Job: that the possibility of God in human life is not a guarantee of safety, but an invitation into relationship that involves an element of risk.  And that is a risk that runs both ways, a risk in which God has as much to lose as we do: for if the Satan is right, and Job’s righteousness is merely a matter of cynical, self-serving calculation, then God’s faith in humanity is misplaced and creation itself is a hollow joke.  Rather than being the revelation of a God who is a law-maker and a punisher, this is a revelation of a God who is vulnerable and at risk.

And it is at this momentous point that we will pause for now in our exploration of Job and what it has to say about the question of suffering.  We have learned that Job is a dissenting text, one in which the wisdom of the received tradition is challenged and critiqued.  And we have learned that one of the first things it challenges is retribution/prosperity theology’s assertions about God and the nature of God’s relationship with humanity.  Covenant with God is not about rules and obedience in return for safety and prosperity; it’s about relationship and risk.  And God isn’t a vicious trickster who punishes us even though we don’t deserve it; rather, God is prepared to make God’s-self vulnerable to us, to riskily invest faith in us, in order to facilitate relationship.  We have learned that God is as much at risk as we are.  And as we pursue our exploration, we may learn more things which disturb and confront; but which also enrich and nourish.